is alive. We boat on the rivers. The urban motorboats drive very fast. There are always two people crew, one person in the wheelhouse, the other gives signals with a whistle for docking maneuvers. Our last ride on a express boat was even faster. The driver had probably planned to ruin the thing completely in one day. Always full throttle, the 140 hp diesel exhausted, big clouds of smoke full jug to the pier, then backwards, the rudder extremely in the opposite direction smashing the boat against the old tires. These were catching the first force. The little time that the boat needed to recover from docking was enough for the newcomers to enter the ship.
The communication between driver and docking mate did not work acoustically with whistles on this ship. That because of the extreme volume of the diesel. The skipper had large rearview mirrors attached and watched her helper so closely that he only needed to make a small gesture to signal forward or backward. When the engine cover flew off in a particularly daring maneuver, the passengers helped with the repair and the wild ride could continue. 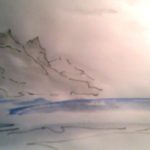 „WHAT PHO“ the name of this Buddhist monastery sounds funny to my ears, as does PeePee Island, the island to the south. In the What Pho monastery there is a Thai massage school, palmistry and astrology. Loudspeakers trough which two male voices were heard. I thought of a comedy event. The two sounded like two comedians giving their latest jokes. Then I looked at two monks talking to each other at a distance of about 2.5 meters, laughing, talking and laughing. No one laughs in the audience, all devout listening people. I found it peculiar that the two monks make fun and the faithful remain in stance, taking every breath seriously. After a couple of minutes I felt calm and serious too.